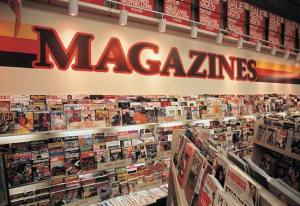 Magazines based around colleges, universities and other academic organizations. Overlaps with journals.

Pop culture from Japan and related artwork magazines, from a variety of countries.

Magazines related to artwork, and design, including architecture.

This is a collection of magazines and newsletters based around gaming of a non-video type: Board Games, Role-Playing Games, and any other sort of related entertainment.&nbsp;

Magazines about health and fitness.

Magazines that are either dedicated to humor, cartoons, or satire. (Different than Comic Books and graphic novels.)

A diverse collection of magazines about knitting.

Magazines related to lifestyles and living.

A dymanic collection of incoming items matching the term "magazine" before being sorted into subcollections.

Just the covers, please! Collections of just covers (and occasionally, content pages) of various magazines over the decades, provided for research, memories, and reference.

The "ideal" for the Internet Archive system is one readable texts item per identifier. However, some users are known to upload entire collections of a given series rather than go through the trouble of making so many individual items. To help make them more readable, copies will be brought into the Archive's stacks, but the original items will still remain. This collection consists of these "mega-pack" items, contributed over years by users.

Magazines related to sound, and music.

Magazines related to present news or current events. Many are for a local area or specific geography.

Magazines covering politics, political issues and criticism/overview of politics. Some magazines may overlap with "news" and "current events".

A large collection of various radio and broadcasting magazines from the last 100 years.

Magazines about sound and audio technology, including mixing, playback, and electronics.

A collection of magazines and periodicals about tattoos, tattoo-related lifestyles, and design.

This collection consists of issues of magazines in either very small runs or for which only a handful of representative issues have been uploaded to the Internet Archive. Some may eventually expand into their own collections, but many are destined to be collected in these virtual stacks, single examples of the runs of magazines they were part of. (Some magazines have full collections elsewhere but those collections are from a specific library or archive; a search for the title of magazines in...

Magazines related to transportation, and driving. (Different from Travel magazines.)

Magazines related to travel, specific places (for the purpose of travelling there).

A collection of the village magazine for Welford on Avon, UK.

Magazines aimed at a younger set. Considered to be a different set than "Teen Magazines".

Ülkü , a journal published between February 1933 and August 1950 , as the publication organ of the People's Houses . Published in three series, the aim of the magazine was tospread the ideology of the public houses and indirectly the republic . The topics are generally news about literature , language , sociology , fine arts , economy , public education, sports and public houses.

DESCRIPTION
The Magazine Rack is a collection of digitized magazines and monthly publications.
ACTIVITY